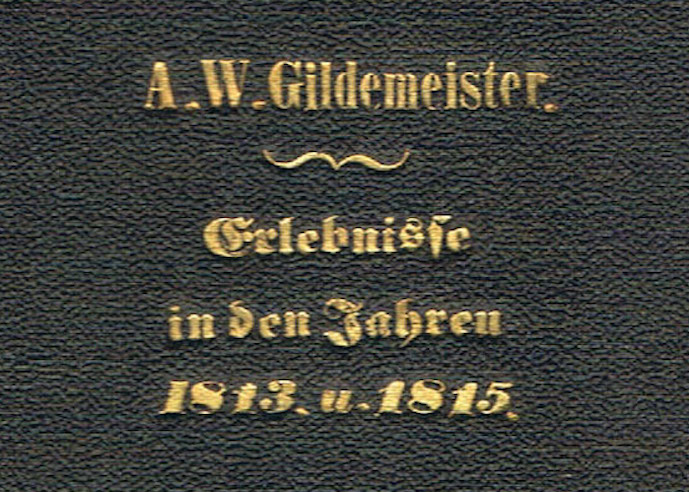 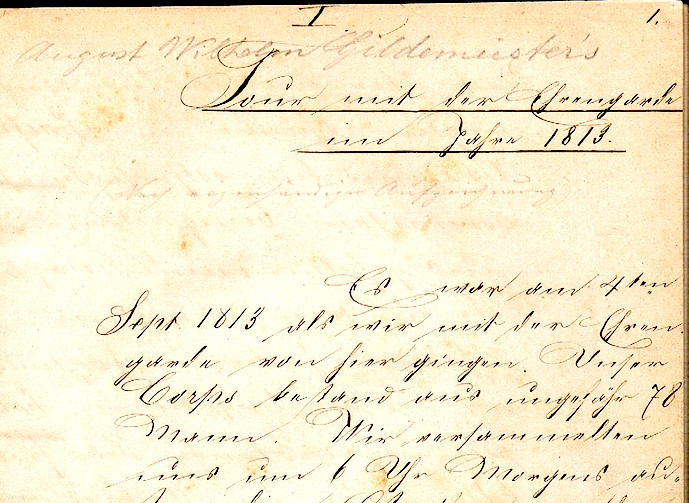 August Wilhelm Gildemeister: Adventures in the Years 1813 and 1815

August Wilhelm Gildemeister was born in Bremen 26 March 1791 as son of the merchant and senator Johann Gildemeister (1753-1837) and of Gerbetha, born Wilckens (1763-1803). After his participation in the German Campaign of 1813 as reported in his diary, he and his Marburg friend Wulf Ludwig Ries went to the United States, where they founded Gildemeister & Ries, a trading company for textiles. They came back to Bremen in 1826 and got involved with the shipowning business, from which the Visurgis shareholder company developed in 1897. Gildemeister was married to Auguste, born Nettmann (1805-1890), with whom he had several children, and he died in Bremen 16 May 1866.

The diary (privately owned) is a handwritten copy, probably from shortly after Gildemeister’s death. The last page has the little date notice 27 July 1867. The leather binding (17,5×21,5 cm) bears the gilt title saying: A. W. Gildemeister. Adventures in the Years 1813 and 1815. The book contains two texts with separate paginations (with 17 blank pages in between). The first text is entitled Tour with the guard of honor in 1813 (p. 1-191), the other one (p. 1-168) has no title. The handwriting is clear, easy to read, but has quite a number of later (?) pencil corrections, especially with regard to French words and names. The diary is published here for the very first time. Please read also the article in the Bremen newspaper Weser-Kurier from 1st of May 2016 (in German).

Bremen was occupied by Napoleonic forces since 1806 and under French government since 1811. Napoleon’s defeat in the Russian campaign of 1812 nourished the hope for liberation and led to riots in the city, which were put down with brute force by General Dominique Joseph Vandamme.
The recruitment of sons of prosperous bourgeois families in Bremen and the forming of the guard of honor have to be seen against this background – just a few weeks prior to Napoleon’s defeat in the so called “Völkerschlacht” at Leipzig (Battle of Leipzig) from 16 to 19 October 1813.

For August Wilhelm Gildemeister and his diary, read also my blog post from 20 January 2021.

The text of the diary is only available in German. Please switch to the German version.