It’s still winter and corona lockdown in Berlin. So there are not many opportunities to go to places other than one’s own desk. What would we be in such times without the power of memory and without our memory aids: in the visual age these are photos rather than diaries and in the digital age often – as in my case – many photos, lots of them. This post is about photos and memory on different levels of meaning.
I think back to a hot July day five years ago, when I met Gesche Würfel, a German-American photographer living in Chapel Hill, North Carolina, in an unusual place. 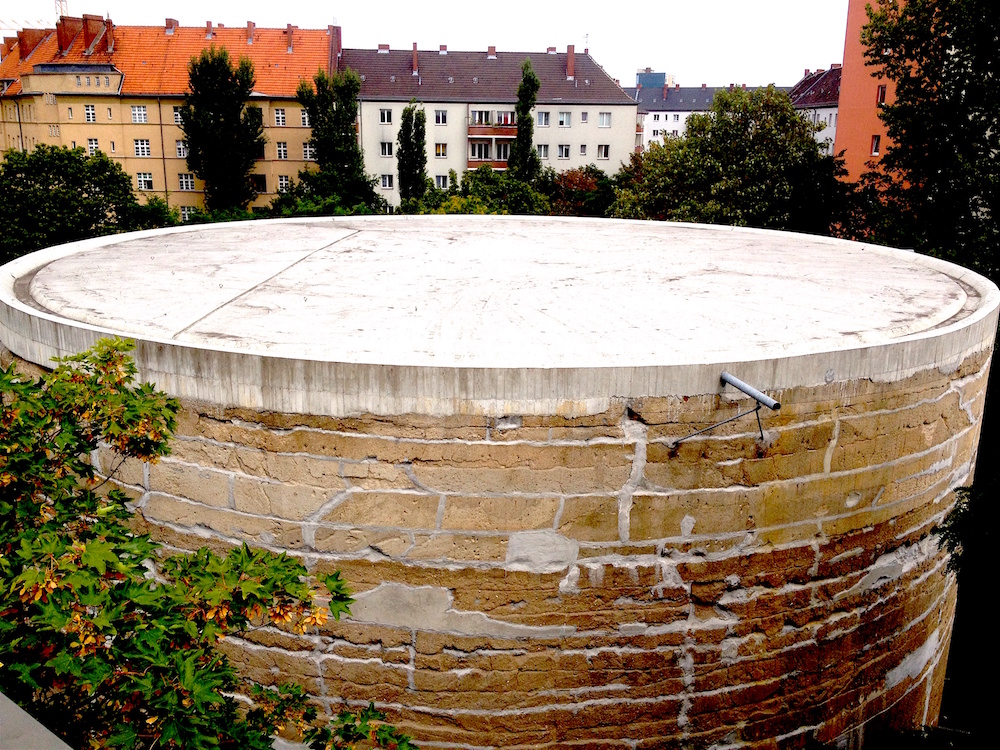 Photo: the heavy load-bearing body from the observation platform built in 2009.

I had not known the place before either, although I had lived near it for several years, not far from the Südkreuz train station in Berlin-Tempelhof. It is one of the strangest architectural witnesses of the Nazi era in Berlin, and also one of the most unknown. Its name is as clunky and massive as it is itself: heavy load-bearing body. The vernacular has made short of it the Naziklotz (Nazi Hulk). It stands where Adolf Hitler – if he had had his way – would have realized his own sketch of a 117-meter-high and 170-meter-wide triumphal arch, executed by his architect Albert Speer. Well, in the dictatorship, the Führer’s will was above all, but these plans were thwarted by the war. It was the megalomaniac plans for the World Capital Germania, which should have been completed around 1950. But by then, the 1000-year Reich had long since been reduced to rubble. The central building was to be a domed hall with a capacity of over 150,000 people between Tiergarten and today’s main train station. The Reichstag would have looked like a dwarf next to it. From this Hall of Fame or Hall of the People, a wide boulevard was to run as a north-south axis in the direction of Tempelhof Airport and end at the Triumphal Arch. Thus at the today’s Naziklotz. 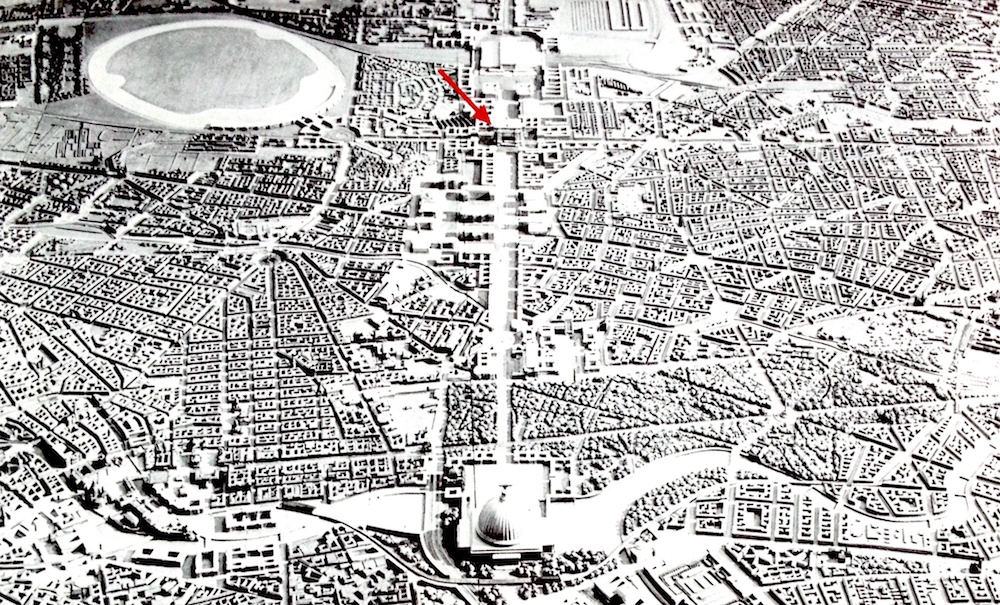 Photo: Model of the projected Reichshauptstadt Germania with its domed hall and the north-south-axis leading to the triumphal arch, location of the heavy load-bearing body (red arrow). The free space on the top left is Tempelhof airport. 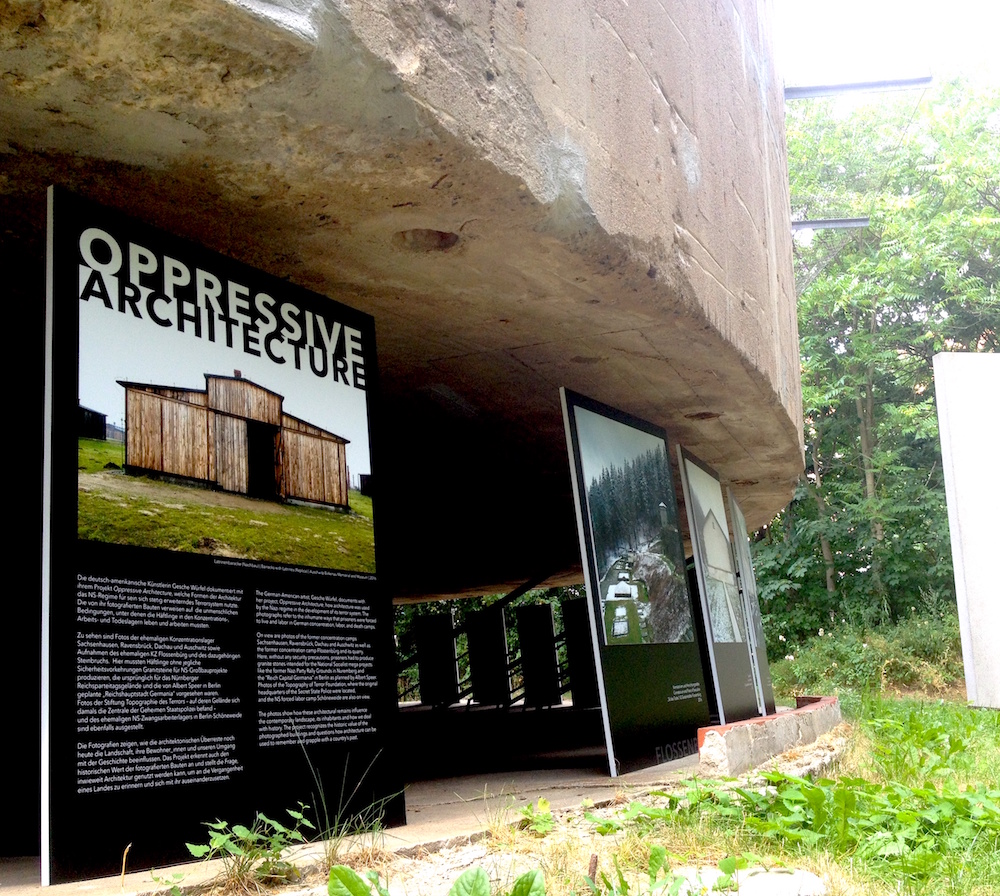 This block was built in 1941/42 by exploiting French prisoners of war to test the resilience of the soil. Yet the 14-meter-high and 21-meter-wide towering concrete cylinder is only part of the structure: with a diameter of about 11 meters, it reaches 18 meters deep into the ground. When the measurements of the installed equipment were evaluated as late as 1948, it was discovered: in the first two and a half years, the block had already sunk almost 20 cm further, so the ground would simply have been too soft for Germania.
The block was too hard to be blown up and was too close to a residential area; therefore, like many high bunkers in German cities after the war, it remained standing and was listed as a historical monument in 1995. On September 12, 2009, on occacion of the national Open Monument Day, the Information Site Heavy Load-Bearing Body was opened to the public. 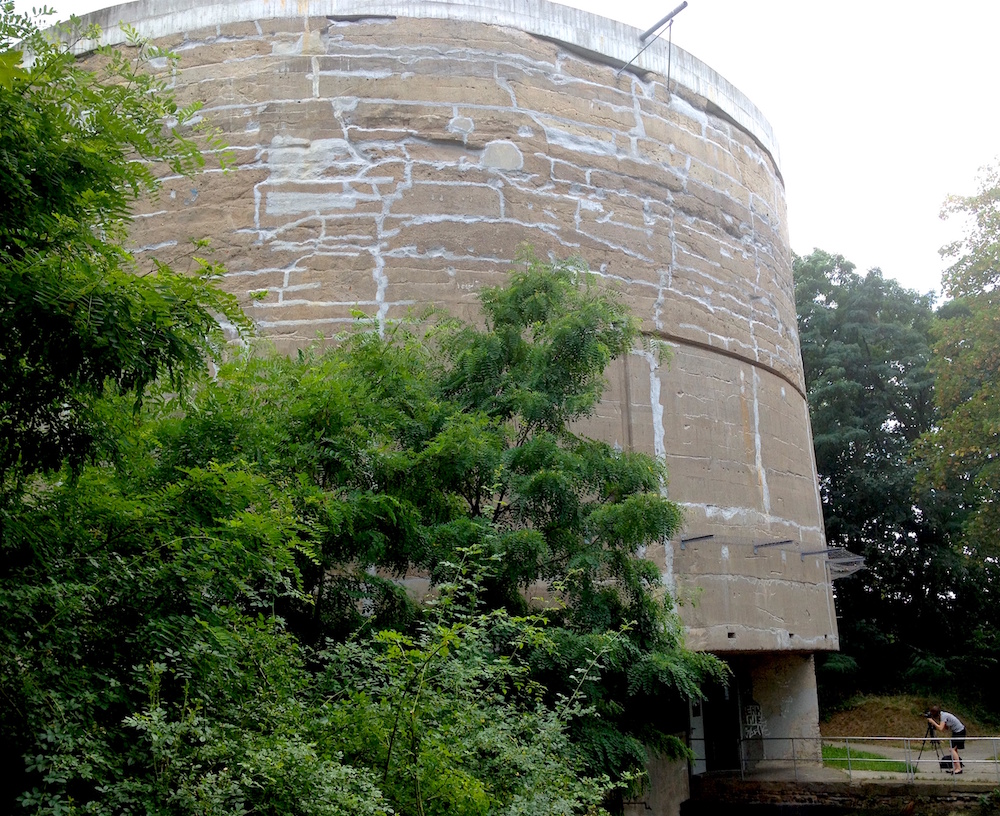 For me, 7 years later, just on this hot July day in 2016, a new view of the dictatorship of National Socialism opened here. It was new because the place seemed less direct: it was not a pure place of information and documentation like other authentic places from the time of the dictatorship. After all, there were no actual remnants of the never realized Reich’s capital to be seen here, unlike to Nuremberg with the buildings of the Reich Party Rally Grounds. Or the barracks, watchtowers and reconstructed fences in the former concentration camp Sachsenhausen (click here fore my post about Sachsenhausen). The heavy load-bearing body affected me primarily through a metaphor, that of oppression. Put into words, it may sound rather flat: walking under the jutting edge of the concrete masses above ground makes you feel the full weight of history. 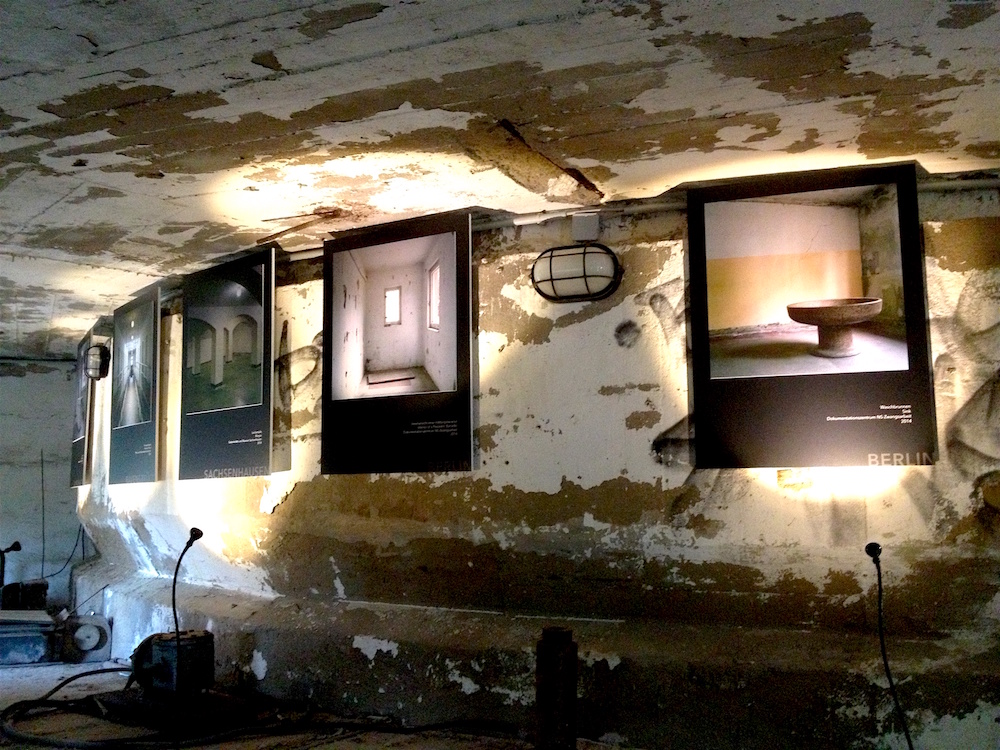 I felt the oppressiveness during my visit not only from the structure itself, but also from a photo exhibition that was set up at the time in this oppressive and depressing interstitial space. Never have I seen such a meaningful connection between an exhibition and its venue. They were images by Gesche Würfel under the title Oppressive Architecture. The encounter with these photos was immediate for me on several levels: the artist herself introduced them to me. I, in turn, photographed Gesche Würfel photographing the heavy load-bearing body – which was at the same time one of the photo motifs, along with such witnesses of time as the Congress Hall in Nuremberg, the morgue in the Sachsenhausen concentration camp, the gatehouse in Auschwitz, the women’s prison in Ravensbrück. When looking at the pictures, one could not only see the oppression, but also feel it – above one’s own head.

Gesche Würfel herself writes about her project:

“Oppressive Architecture explores and documents the relationship between architecture and oppression during German Nazism. Oppressive architectural structures are being photographed in a cross-section of places. The project examines the inhumane ways that prisoners were forced to live and labor in German concentration, labor, and death camps as represented by their architecture. I also photograph propaganda architecture to show how the Nazis oppressed the general public with dominating structures and imposed their vision of a great German state. The project explores how these architectural structures continue to influence the contemporary landscape, its inhabitants, and our understanding of history. The project’s contribution is its documentation of a wide range of remaining physical structures of oppression. It also recognizes their historic value and raises questions about how architecture can be used to commemorate and reconcile a country’s past.” (source: https://geschewuerfel.com/Oppressive-Architecture)

Pictures are indispensable for memory. Be it in winter for the memory of summer or in democracy for the memory of dictatorship. Only those who know the past can appreciate the present. This is all the more true at the turn of the times in which we currently find ourselves: The eye witnesses are passing away and the memory from one’s own experience, the possibility of a first-hand mediation of memory gest lost. All the more there is a need for authentic places of information and remembrance such as the heavy load-bearing body. And all the more we need people who go beyond a purely historical approach and keep the memory alive by appealing to different senses within a broad spectrum between documentation and provocation: We need artists like Gesche Würfel.

For Oppressive Architecture, Gesche Würfel and her other projects such as the current one titled When Trees are Dying: