Fled from Hitler – murdered by Stalin – and not forgotten!

Six years ago today the story about Willi Hentschke and his family appeared in the Berliner Tagesspiegel and about how I could help to illuminate it by means of genealogy: Wurzeln ans Licht. On this occasion I tell here – with kind permission of the relatives – this story from my point of view.

On March 3, 2013, I meet in a pizzeria near the airport Berlin-Tegel Taissia Chinina-Kelly with her husband from England. They are passing through and want to talk to me. This is an unusual start to an unusual research project, because I only meet most of my international clients virtually online. Taissia talks about her mother, Julia Likacheva, with a soft Russian accent.

She was born in April 1937 in Voskresensk near Moscow, and now lives in Novosibirsk. Julia never knew her father, at least not in such a way that she could remember him. Shortly after her birth, he was taken away from home as an alleged spy and enemy of the state and never returned. It took almost 50 years before she learned the truth, only after glasnost and perestroika. Before that, there were at best half-truths and lies, up to and including September 31, 1956 as the date of death, a day that does not even exist in the calendar. The truth was this: Willi Hentschke fell victim to Stalin’s “Great Purge” and was shot a few weeks after his arrest, like tens of thousands of others, at the Butovo firing range near Moscow.

This fate has torn a big gap in the family tradition. And it is often gaps like this that prompt people to follow in the footsteps of their parents, grandparents or great-grandparents. Where did Willi Hentschke come from, what kind of family did he come from? To find answers to these questions, Taissia wanted to meet me. She has some documents for me, with the help of which I can start my search. After all, it is known that the Hentschkes lived in Berlin before Willi, as a communist, fled from the Nazis to the Soviet Union as early as 1934. Before I accept an assignment it is always important for me to know that I can do something. That there are probably sources for the questions asked. And I know that pretty quickly after Taissia tells me about her grandfather. 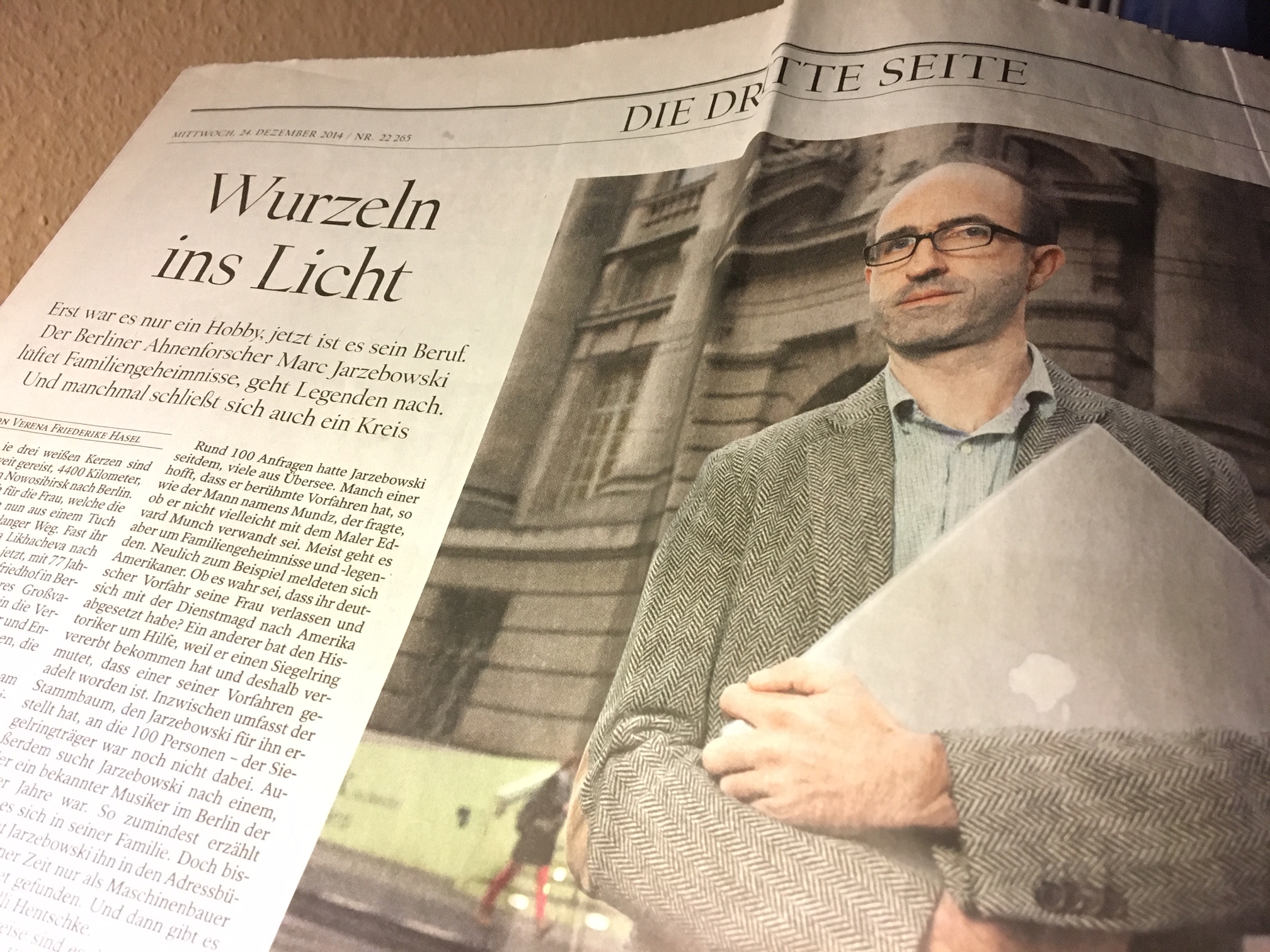 So I get to work, find Willi’s birth record from 1910, the parents’ marriage. His mother came from a Berlin family of laborers and lantern-lighters, and his father had immigrated from Schwiebus in East Brandenburg, now Świebodzin in Poland, in the wake of industrialization. They lived in Wedding in a house that still stands today. Willi had a younger brother Robert. From a methodological point of view, the research in the Berlin State Archives, in the Archives of the Protestant Church Berlin-Brandenburg, in the holdings of the Foundation Archives of Political Parties and Mass Organizations of the GDR in the Federal Archives (SAPMO) on Willi Hentschke’s escape in 1934, as well as the correspondence with the City Planning Office Berlin-Mitte and with various cemetery administrations are routine work, the results not spectacular. But the knowledge of the emotional implications of this work for the old woman in Siberia and for her family nevertheless makes the assignment a special one for me.

The meeting with Taissia in Tegel will not remain the only one. For November 2014, she announces that she will be in Berlin with her mother, who, together with a granddaughter, wants to set out from Novosibirsk to trace the newly acquired knowledge about her father. It will be a moving three-generation visit, which journalist Verena Friederike Hasel also follows for the Berliner Tagesspiegel. Julia Likacheva shows us the few mementos, especially a photo album. She created it herself in order to at least be able to counter the absence of her father. One of the few photos of the whole family shows Willi Hentschke and his Russian wife Elena in a forest, the mother is carrying little Julia in a bundle on her arm. 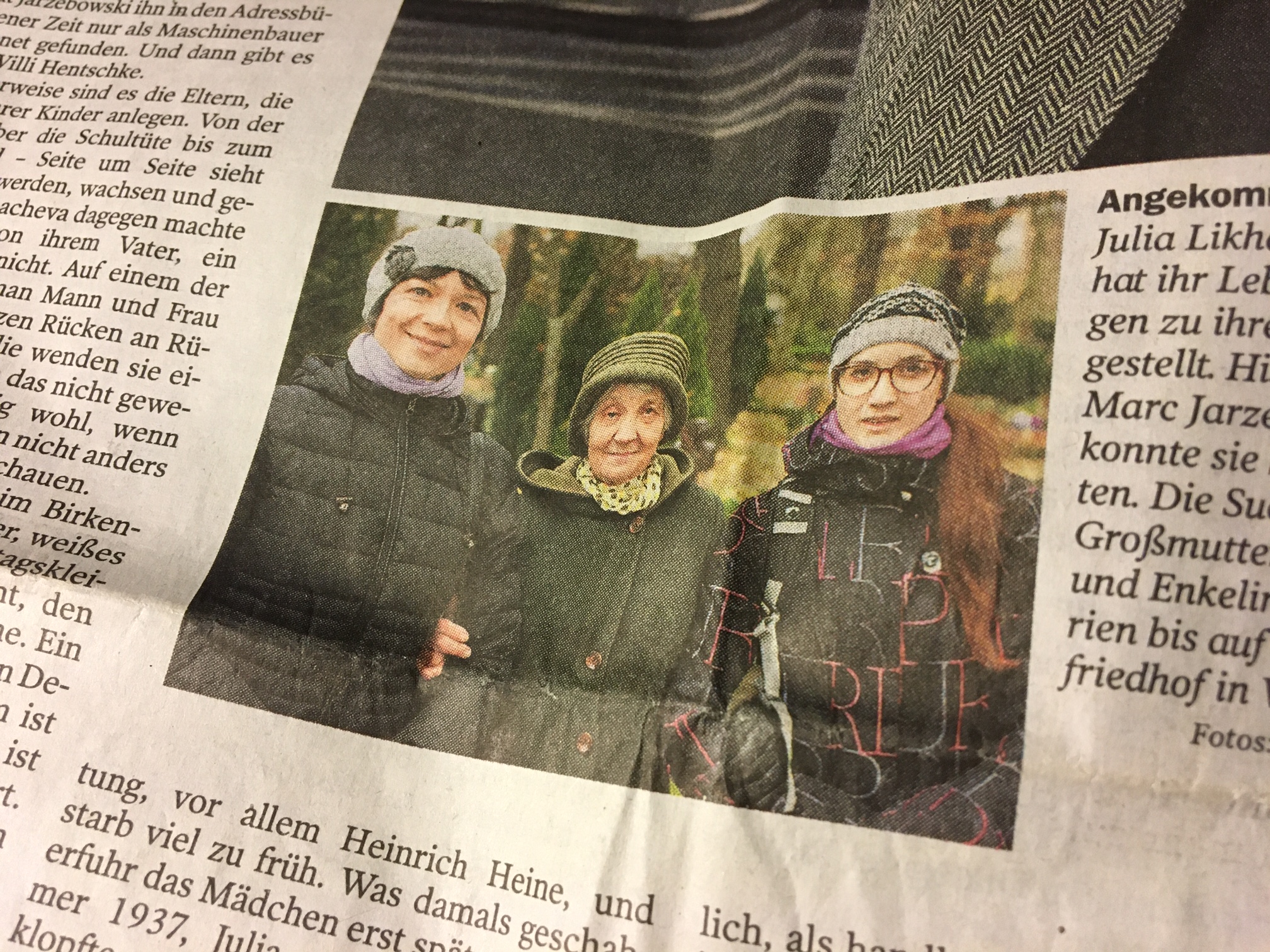 We go to the house where Willi lived with his parents. We go to the cathedral cemetery on Müllerstraße in Wedding. The cemetery administration was no longer able to say where exactly the graves of Willi’s parents were, they have long been leveled. But in this cemetery they rest, and this spatial presence is of great spiritual significance to Julia. She lights candles she brought from her home and sings. It’s an intimate moment in which I fade into the background. Rarely is research really complete, rarely are all sources exhausted. I could go on tracing the Hentschkes, Willi’s brother Robert, for example, and his family. But still, I have the feeling that something is coming to a conclusion here. Julia keeps emphasizing how important this visit is to her. A few years later, she will make another trip, not quite as far: then, in Butowo, she finds her father’s name on a plaque. 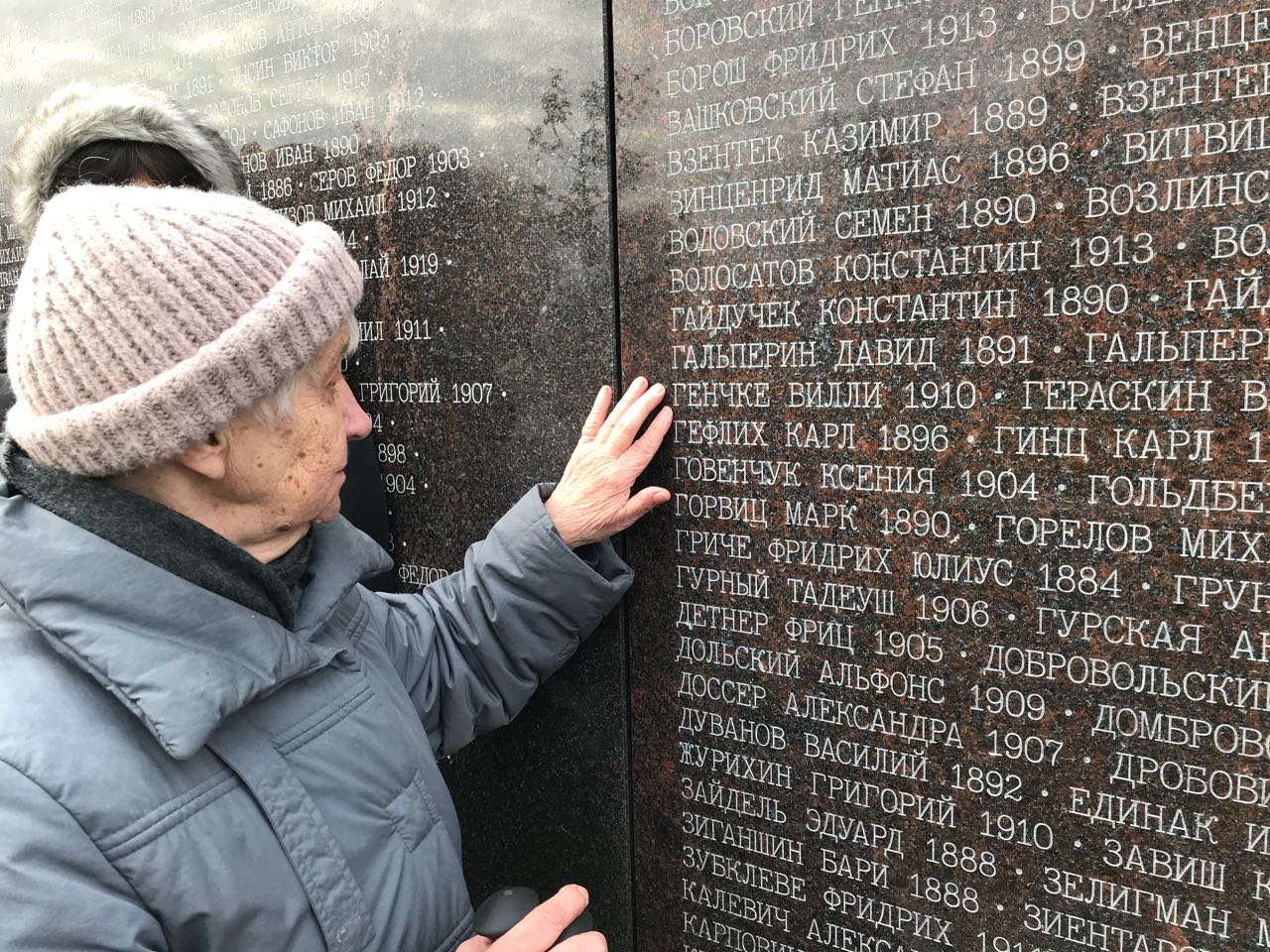 The Lives of the Living

For me, Julia brought a print in the form of a bookmark. A symbolic thank you, which I still use today. Genealogy is not only good for making family trees. The story of Willi Hentschke and his daughter showed me what significance the lives of the dead can have for the lives of the living.