The territory of the modern federal state of Saxony-Anhalt belongs to the oldest Jewish settlement areas in Germany. Jewish merchants are mentioned in chronicles and in royal charters for the episcopal towns of Magdeburg, Merseburg and Halle as early as the 10th century, followed by Halberstadt in the second half of the 12th century.

In the late middle ages, from the beginning of the 14th century, communities are known from Aschersleben, Bernburg, Ballenstedt, Calbe, Schönebeck, Stendal and Wittenberg. Their history is a history between sovereign toleration or protection and prosecution or expulsion. Especially in the crises of the 14th century, above all the great plague, Jews were pushed into the role of the scapegoats like anywhere else in Europe.

The mockery and contempt of the contemporary Christian majority population is still visible in the Gothic anti Jewish reliefs of the Jews’ Sow (Judensau) in churches in Magdeburg, Wittenberg, Calbe and Zerbst. In recent years, these depictions have caused heavy discussions about if they should be removed, enveloped or critically commented and contextualized. 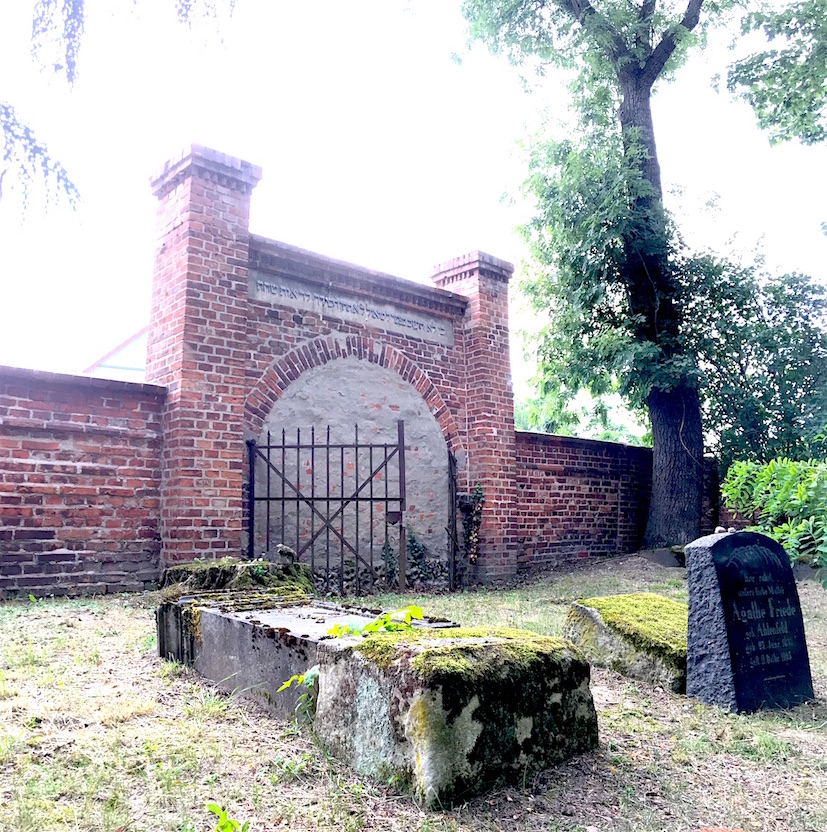 The discontinuity of Jewish settlements continued during the 15th and 16th centuries. After a local escalation of conflict, archbishop Ernst II of Magdeburg expulsed all Jews from his territory in 1493. His suffragan bishops at Naumburg-Zeitz and Merseburg followed this example. Later, the 30 Years War hit the country severely.

After the Peace of Westphalia, the sovereigns faced the task of economic reconstruction and opened up for – controlled and restricted – Jewish immigration. Friedrich Wilhelm of Brandenburg, the Great Elector, allowed 50 Jewish families to settle in his territory after their expulsion from Vienna in 1670. However, this had more effect on what is the federal state of Brandenburg today than on the Altmark or the former bishopric of Magdeburg, because Magdeburg was not incorporated into the Electorate until 1680. Only few early modern Jewish congregations in Saxony date back to the 1670s and 1680, such as the ones in Halle, Jessnitz and Oschersleben. 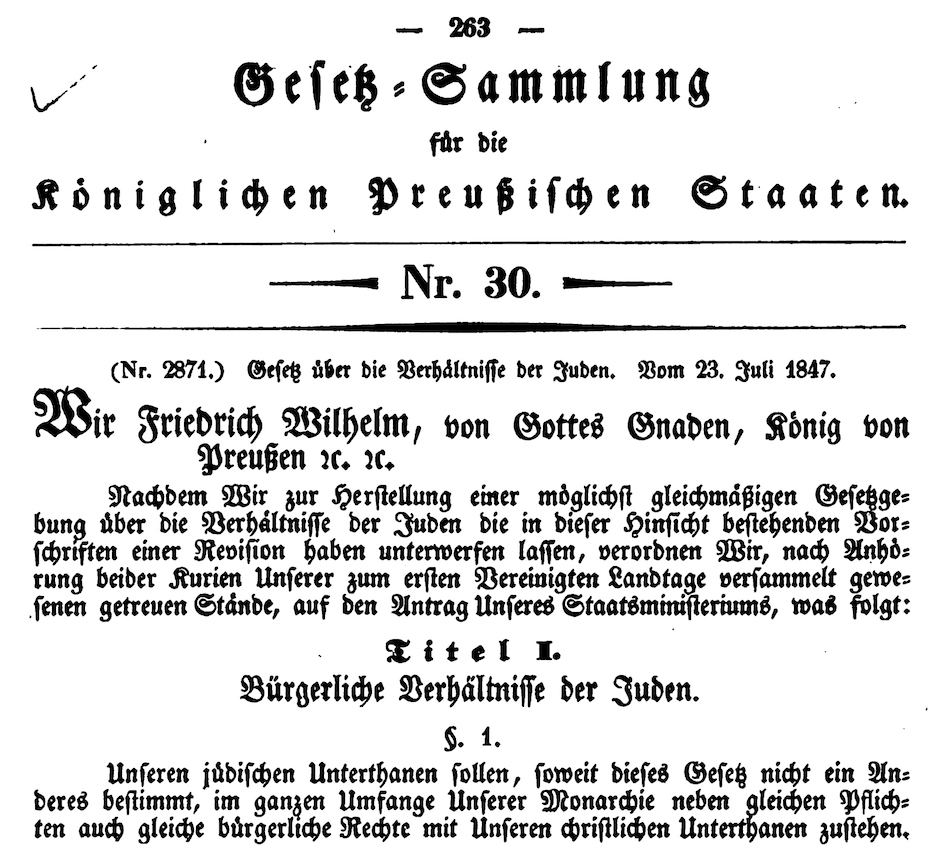 Prussian law on the status of the Jews from 1847

Halberstadt, the former bishopric which was merged with Brandenburg as a direct result of the Peace in 1648, developed into one of the largest and most important congregations in central Europe, with about 700 Jews living there in 1700. Along with Frankfurt upon Main in Hesse, Halberstadt was considered the center of Jewish Orthodoxy in Germany until the 20th century.

The Anhalt princes followed a similar policy of tolerance like the Brandenburg Electors. They allowed residency and granted charters of protection. Jewish congregations were founded and grew in Dessau, Sandersleben, Köthen, Gröbzig and Zerbst.

The 18th century saw more foundations as well in the Anhalt principalities as in Brandenburg (with Saxony), but privileges such as the erection of a synagogue or a cemetery had still to be granted individually. Under Napoleon and in the years following him, things became easier. New congregations were founded in Eisleben, Haldensleben, Quedlinburg, Wolmirstedt (Saxony) and Aschersleben, which was temporarily – like Halle – part of the Napoleonic kingdom of Westphalia.

The 19th century, the so called Jewish Emancipation resulted in a consolidation of the congregations, visible in their new synagogues and mikwehs, buildings which did no longer have to be hidden behind residential homes. In the principality of Anhalt-Bernburg, Jews were granted citizen rights in 1810, followed by Anhalt-Köthen two years later.

In Prussia, the edict of toleration from 1812 did also enlarge the rights of the Jews – though still not without restrictions – and made them legal citizens like the rest of the population. As one of the requirements they needed to choose fixed family names, thus replacing the traditional naming with ben (son of) or bat (daughter of) and creating a precondition for the registration of births, marriages and deaths following the example of church records.

A consecutive law from 1847 aimed at the administration of the Jewish communities throughout the country and gave them the legal status of corporations with the right to raise taxes and with the obligation to provide religious education at schools. All Jews were considered to be members of their local congregation with a synagogue or of the synagogal districts they lived in. The creation of these synagogal districts corresponded with the protestant and catholic parish structures.

Under these conditions, Jewish life was able to flourish, but was overshadowed by the propaganda of rising antisemitic movements after the taking power of emperor Wilhelm II in 1890, such as the German Social Anti-Semitic Association for Halle and the Saale district. In 1933, about 30 Jewish congregations existed on the territory of the modern federal state of Saxony-Anhalt.

Fascism eradicated this life like everywhere else in the country. In Magdeburg, for example, only 119 people of 2300 survived the Shoah. Of the synagogues, only the ones in Wörlitz and Gröbzig (both in the Anhalt part) escaped destruction. In Gröbzig, the architectural ensemble with school, meeting hall and cemetery houses a Museum of Jewish cultural history of the region of Central Germany today. 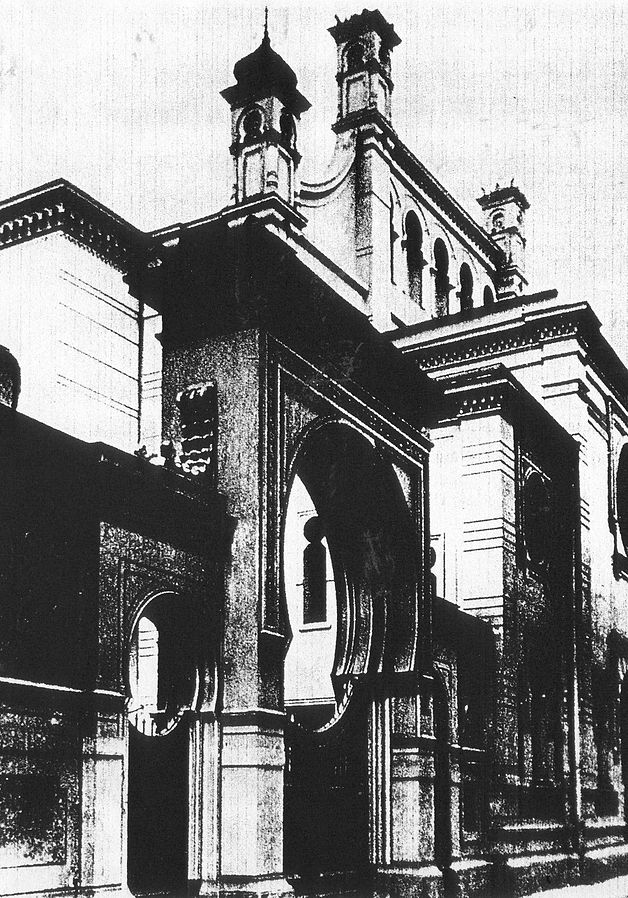 The old synagogue in Magdeburg before its demolition 1939

After the war, only the congregations in Magdeburg and Halle were founded anew in 1947 and formed the State Association of Jewish Communities in Saxony-Anhalt, but they eked out a more than moderate existence during the decades of the secularistic GDR.

The political change and the arrival of new members from the former Soviet Republics after 1990 enabled a revival and the forming of a third congregation in Dessau in 1994. The State Association had formally remained in existence since 1947, even though the administrative GDR reform of 1952 replaced the federal states by districts. Today it represents the members of the three congregations and is one of the 16 state associations under the umbrella of the Central Council of Jews in Germany.